I’ll Never Be French (No Matter What I do)

For many Americans, France is the go-to country for culture. We revere French gastronomy, style, painting, literature. Oh, the chevre! The mille-feuille and the tarte tatin! Madame Bovary and the Eiffel Tower! The way the Parisiennes fling their scarves so artfully around their perfect necks!

Some francophiles are so besotted that they end up moving to “la Hexagone,” as the French refer to their country. By now, there’s a full shelf at any bookstore of tales of those lucky — or unlucky — souls who have made the attempt. These books seem to fall into one of two broad categories: First, there is the lyric paean to a region (often Provence) where life is simpler and better than in the United States, the postcard-worthy fields are full of fragrant lavender, and every village seems to have its own particular eau-de-vie, each tastier and more potent than the next. Then there is the trials-and-tribulations saga, full of shaggy dog stories of zee-French-zey-are-a-funny-race, to paraphrase writer Adam Gopnik. Both types often feature a house (crumbling wreck, funny workmen, cultural misunderstandings) or a love affair (short- or long-term, bridgeable or unbridgeable cultural differences). Two new books fit neatly into these categories: Mark Greenside’s I’ll Never Be French most definitely belongs to the trials-and-tribulations subgenre, while Mary Ann Caws’s Provençal Cooking can be filed under AP, for Adoring Paean.

Greenside describes himself as a left-leaning Californian who was brought to Brittany by a girlfriend. The relationship didn’t last long, but his love affair with France, or more specifically with a tiny Bréton village in the department of Finistère, did. He now spends half the year in the United States, and the other half attempting to understand zee funny race. In telling his house-buying, getting-to-know-the-villagers tale, Greenside captures how an American in France trying to accomplish the simplest of life’s tasks can feel like a complete and utter buffoon. In one memorable episode, he describes the way his insurance agent always seems to regard him with absolute dread, wondering (or so Greenside supposes) what unanswerable question the foreigner will ask in his mangled French:

“He’s reacting the same way I do whenever a girlfriend says, ‘We have to talk.’ ”

Greenside takes us through his dealings not only with “The Insurance Guy” but also with “The Oil Guys” and “The Floor Guy.” While he doesn’t exactly triumph, he does endure. The big mystery remains how he does this, if his French was as bad as it seems to have been. Since the book talks anachronistically of the franc, the reader realizes that these events took place in the Stone Age before the euro; with any luck, Greenside has since mastered the fine art of the French subjunctive — or at least the conditional past — in the intervening years.

The book winds up with a winning description of a 50th birthday party Greenside threw for himself, and then — baf! as the French comic books would say — the story comes to a too-abrupt end. Greenside realizes that when you try to live a bifurcated, bi-national life, there’s a price to be paid (no matter how good the cheese). “When something happens here, I worry. When something happens there, I worry. I now worry two times as much as I used to.” It’s cute, but it’s not enough. Greenside could have given a bit more thought to his irreducible American-ness, to the question of why it is, exactly, that he’ll never be French, and to the auxiliary question of why he even thought about trying.

Mary Ann Caws’s Provençal Cooking purports to be about food, but, strangely, the focus doesn’t turn to matters gastronomic until more than halfway through. Caws is a noted scholar of French literature who translated the work of the Provençal poet René Char. It was through her work with Char that she came to love Provence and to be the owner of a, yes, crumbling structure called a “cabanon.” Her account is disjointed and comes to no real conclusion. Yet it is not without its charming moments, such as when she explains her failure to comprehend the Provençal dialect or describes how, two hours after leaving a neighbor’s big fête, her family was summoned to come back to “rinse” out their stomachs with a helping of onion soup. The problem is that these anecdotes never add up, and the endless valentines to Provençal life are never spiced with anything more piquant than honey. The reader learns that Caws is divorced at some point and that she is now remarried, but we are never told directly about anything more controversial than the look of Provence’s celebrated Mont Ventoux or the usefulness of always having a basil plant nearby.

In addition, the book is marred by a troubling sloppiness, especially in the recipe section. Phrases and even whole paragraphs appear on one page, only to reappear with little or no alteration on another. Caws refers throughout the book to a beloved piece of cookware known as a doux-feu. It sounded intriguing, and as someone who likes to cook, I was eager to find out what it was. After numerous mentions in which it is never explained, Caws finally lets us know on page 224 — just pages from the end of the book! — that it’s a sort of Dutch oven with a place for water carved into the top, “like some miracle: nothing ever dries out, even when you leave it for hours.”

But in sharp contrast to this most impractical delay, Caws offers a lovely, if brief, section on several of her favorite Provençal markets. Although those in the towns of Apt and Carpentras are well-known, the others — in the villages of Bédoin, Sault and Mormoiron — are not, and any reader planning a trip to the area would do well to take note. If only Caws had given us more in the vein of this markets section and less of the hurried, thrown-together recipe section, her book could have been much more valuable. ·

Anne Glusker is a writer living in France and the host of “Stir It Up,” a weekly Swiss radio show on food. 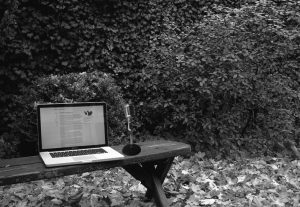